What is Conscious Bias

Conscious bias is where the recruiter discriminates against a job candidate because of one or more of their characteristics. The most obvious discrimination being; gender, age, disability or sexual orientation.

The Types of Conscious Bias

In The Equality Act 2010, the list of protected groups, known as “protected characteristics” are:

Why Are Bias and Discrimination A Problem

Bias reduces your talent pool and is likely to see you hire inferior candidates for no good reason.

By eliminating as much bias as possible you will improve your recruitment process and hire the most suitable candidates.

What is Unconscious Bias in Recruitment

The Types of Unconscious Bias

These are the most common examples of unconscious bias, although this list is not exhaustive;

If you have a panel interview and three people believe one thing about a candidate and you believe something contrary, there is a risk that you will change your opinion simply because the rest of the group thinks differently from you. Your opinion will conform to the opinion of the group.

This is the view that we tend to think that the most handsome individual will be the most successful. But this can also play out in terms of other physical attributes a person may have.

In recruitment, it’s common that recruiters will look to fill a role with someone who shares similar physical attributes to the person who held that role before, or who they believe looks like the kind of person who should have the role based on their preconceived bias.

Research indicates that being handsome gives an advantage in an interview. This research indicates there is bias in favour of tall people and it is likely to be unconscious bias rather than conscious. It’s unlikely that anyone sits down and says “I want to hire a tall person”.

Affinity bias occurs when you unconsciously prefer someone because they remind you of yourself. This is very common, especially when the boss is doing the hiring.

From PeopleMaps’ own research we have seen this scenario commonly played out. Unless the candidate will be doing the same job as the interviewer, then affinity bias is unlikely to result in a good hiring decision.

Halo is when we see one good thing about a candidate affect our opinions of everything else about that person. We are in awe of them due to one thing.

For example, we may be overly impressed that they attended an Oxbridge University and thereafter see everything else about them in a similar glow. We lose our objectivity as a result.

The Horns effect is when we see one bad thing about a person and we let it cloud our opinions of their other attributes.

For example, we may be put off by a person’s accent and draw a whole bunch of negative conclusions about them, simply because of their accent. Once again our judgement is clouded. We may not get past their accent to see that they have a lot to offer the role.

It’s human nature to like our reflections. We find it comfortable to be with people who are like us. This bias can affect our judgement and prevent us from hiring the person who is most capable to do the job.

We evaluate whether the current candidate did as well as the previous candidate. Comparing two individuals instead of comparing each individual against the job requirements.

Attribution bias involves the idea that achievements result from luck while errors or mistakes occur due to a lack of skills.

This is where we form our opinion first and then look for evidence to support our opinion. Too much reliance on “gut feel” is often just an expression of confirmation bias. It is rarely going to see you make an unbiased decision.

PeopleMaps would add one more to the list; “performance bias”. Some candidates are very good at job interview performance and some are very poor at representing themselves. As a recruiter, it is very difficult to hire the poor performer over the good performer, regardless of any logic that indicates that the poor performer may be better at doing the actual job.

What is the legal situation?

In the UK we have the Equality Act 2010, and almost identical legislation exists across Europe. Many other countries have similar legislation.

In short, your recruitment approach should comply with your country’s legislation and should avoid conscious and unconscious bias on any of the listed protected characteristics.

How can you use PeopleMaps personality profiling to overcome unconscious bias?

A PeopleMaps personality report is arguably the least biased component in your entire recruitment arsenal. PeopleMaps does not ask the candidate anything about the protected characteristics. We have no information or opinion about the candidates;

The PeopleMaps registration form asks candidates what is their preferred pronoun, rather than ask their gender. Read the article on Gender Diversity and Inclusion for details on why this is important.

PeopleMaps also provides an optional feature called “gender-neutral” where the report will be a mishmash of male and female pronouns.

PeopleMaps provides you with a great deal of unbiased data to use, instead of just your unconscious bias. This additional data will help dilute the effect of any unconscious bias you may have.

The personality report is written as an Interview Guide and includes interview questions to ask. Thus the report helps guide the interview conversation, which may also help reduce the influence of unconscious bias.

The personality report only talks about issues pertaining to the specific job role.

PeopleMaps also provides a feature on Shortlist Pro that hides the names of the applicants, revealing only their Gauge scores. this address any bias interviewers may have around names, where names indicate things such as gender, ethnic origin and even religious background. it is possible to conduct an initial filter and selection without displaying candidate names.

What is indirect discrimination?

Indirect discrimination is when there’s a practice, policy or rule which applies to everyone in the same way, but it has a worse effect on some people than others. This could see you in breach of the Equality Act 2010.

If you specified that the individual may have to drop what they are doing and go on a business trip with no notice, then this could be seen to discriminate against women with young children.

So although you are applying the condition to everyone, it could be seen as bias against one or more of the protected characteristics.

How PeopleMaps Can Help You

The objective of recruitment is to hire the person who is most likely to be the most successful in the role. More specifically, you want to hire people who can cope with the job for the foreseeable future and perform at high levels.

It is also worth mentioning that you probably do not want to hire someone who may be disruptive to other people’s performance.

The 12th law of Personality states that;

“Humans are emotional creatures searching for logic to justify the emotional decisions we make.”

In short, humans are not very objective by nature. Even with the best intentions, we are subjective. One way to counteract all our unfounded bias is to drown it out with actual data. Better to have facts and actual data influencing our decisions, than our subjectivity and bias.

PeopleMaps personality reports provide you with that data. They keep you very focused on specific and relevant data too. You can use this good data to counterbalance any biased opinion or subjectivity. The more data you have in the mix, the less influence bias, subjective data has.

There is a huge difference between discernment and bias. For example, if you know you are looking for a candidate who is naturally determined to close a sale, then the personality report will help you identify candidates who have a natural preference for this. This is not discrimination or bias. This is you exercising your best judgement as to what the job role requires and identifying who is most likely to deliver that.

Personality reports are not about whether an individual CAN or CAN’T do something. They indicate the candidate’s natural preference. 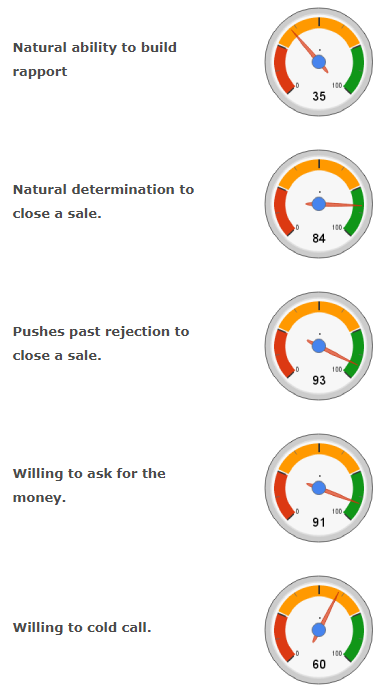 The Problem with Labels

PeopleMaps does not use labels for a number of reasons. For one, they are a gross oversimplification of something as complex as human personality. Reducing an individual down to a single word is preposterous. Labels are open to interpretation and where there is interpretation there is room for error, regardless of how intensive the training may be.

A Responsibility To The Candidate

Work-related stress can be caused by placing someone in a work environment that is not conducive to their personality. For example, if the work environment is hectic and requires tight deadlines to be met on a regular basis, then you would be doing a candidate no favours if their personality preferred a lot of time to think things through. You may be introducing them to a stressful situation, which is doing no one any good.

If the organisation prioritised doing things quickly overdoing things in detail, then again you would be introducing a candidate into a stressful situation, if they like to do things to a high standard and double-check that all the details are correct.

Part of your job as a recruiter is to match the individual to the actual work environment. A mismatch between personality and the environment often leads to stress.

Conscious Bias and Discrimination must be challenged at every opportunity. Not only is it against the law and despicable practice, but it is also extremely bad for business.

You are likely to see higher staff turnover and lower levels of performance if you pass by on the best candidates in favour of biased choices.

Unconscious bias is more difficult to address, as by its very nature is unlikely to be intended bias. Education is one way of addressing this, as raising awareness may help people check themselves for unconscious bias.

And finally, the surest way to tackle all bias is to provide sufficient objective data from an inherently unbiased source. Although humans are subjective by nature, computer-generated personality reports are not. PeopleMaps reports can provide plenty of objective data to counter inherent bias and help you make better hiring decisions.