The theory underpinning PeopleMaps comes from the work of Carl G Jung, the Swiss psychologist who believed every individual was unique. He was against boxing people and used the analogy of a compass as a method of finding his way around people’s differences, helping him to understand and aid the development of their potential.

Jung spent his whole life on his development – especially on what he called individuation, which he described as the person’s attempt to get in touch with their full potential as a human being. His was a psychology for the second half of life, learning was a lifelong project and people were capable of changing and developing right up to their last breath.

He placed no value on people remaining consistent – his encouragement was for them to try other shoes. If someone has spent their whole life with a preference for Introversion, which was his preference, he thought they would not be fully developed until they worked on their Extraversion. For him this was the main advantage of the bi-polar scales; to let people take stock of where they were and then work at developing their less used gifts.

“Every advance, every achievement of mankind, has been connected with an advance in self awareness.” C. G. Jung, Psychological Reflections 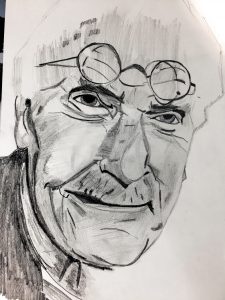 Jung’s theory focuses on the cognitive aspects of personality i.e. how people think; take on board information to make their decisions and sense of the world.

He created categories of psychological type through a combination of attitudes and preferences measured by bi-polar scales. Extraversion and Introversion he called attitudes, and Thinking and Feeling he described as rational preferences, with Sensing and Intuition being irrational preferences.

There is a great variety of behaviour within these categories depending on which position on each of the bi-polar scales the person’s behaviour is plotted. There are no right or wrong psychological types – the scales flag up our differences. Wouldn’t the world be a dull old place if we were all the same?

The majority of people will not be extreme, demonstrating a close balance of extraversion and introversion – as such they can be more difficult to read. Those more obvious preferences are easier to read. Most of us can point to an example of someone who acts and thinks out loud most of the time and identify them as an extravert and similarly those who are quieter, because they are reflecting on their thoughts, can be identified as introverts.

The environment has an impact on our behaviour. If for example one’s preference was for reflection and every member of the group shared this preference, someone would be forced to become more active and extraverted. The person acting the role would be seen as an extravert to the rest of the group, however, if their natural preference was for introversion they would be uncomfortable maintaining this for any great length of time – and when the environment changed would revert to their preferred attitude

The opposite would apply to Extraversion – if everyone was thinking and acting out loud, some of the group would actually be and appear more introverted. People have different tolerance levels: to someone with a preference for extraversion, other more extremely extraverted people could appear too loud and they may naturally seek solace in more reflective behaviour. This would not make them a natural Introvert as they could not maintain this attitude for any great length of time and would be soon found seeking external stimulus.

Jung referred to his system as a compass and this is how the profile should be used. We can make these observations about people when they respond to circumstances at different times but we do not know really know the person’s natural attitude or preferences – this is where profiling comes in.

PeopleMaps captures the individual’s response made to an on-line questionnaire and electronically measures them on the bi-polar scales. This enables the assessment of the person’s natural or most comfortable type. People have a preferred natural type, however, they are often versatile and can respond differently to a variety of stimulus, such as the examples given above for extraverted or introverted behaviour.

People whose preference is for thinking make objective decisions and are able to put their personal feelings aside to reach a (to their mind) logical, detached analytical conclusion. They obviously do have feelings and will often examine how they feel about the decision at a later stage but their feelings rarely get in the way of making the decision in the first place.

People whose preference is for feeling make subjective decisions integrating feelings and facts. They trust their feelings and usually include values in their decision making. They will be reluctant to take decisions if the decision does not feel right. They ask themselves how they and others will feel if they make this decision. All of these considerations have to be undertaken before they are comfortable with the decision.

There is no right or wrong way to make decisions. Both of these methods will have produced good and bad decisions. It could be argued that thinking decisions will be quicker. This will be true but speed won’t appear to be a value if the decision was wrong. Similarly, with a feeling decision, people may be happier but not for long if it was the wrong decision made for the wrong reasons.

People whose preference is for sensing will want more factual information. They will want to know if they can touch or see something to ascertain that it is real. They want proof – real tangible evidence. They will see themselves as realists. Others may see them as pragmatic.

People whose preference is for intuition will depend upon imagination and possibilities. They will be bored with too many facts – they’re all about possibilities and potential. They can see the big picture and want something to get excited about, not for them the pragmatic view of the world.

Just as with Thinking and Feeling, there is no right and wrong with the irrational preferences. Intuition is about possibilities and potential, however, if this is carried too far, the challenge is that the potential does not become any closer.

Sensing could be pragmatic but if the demand for evidence inhibits all possible potential then this could also be counterproductive. Just as with all the scales they balance each other.

Within every person, there is the ability to use either side of the bi-polar scales, although we will all have preferences for one side more than the other – most of the time. When two people are working together who have different preferences, they can complement each other.

The person with great intuition could benefit from working with the person who is totally practical and pragmatic, as together they could work out a way to harness the creativity and imagination of the intuitive. Using the strength of the pragmatist’s realism, they could bring about many successful conclusions.